The magic of Malayan place names 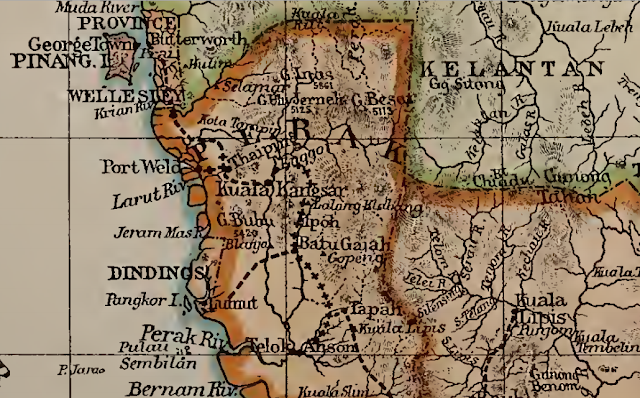 In the whole of the Federated Malay States there are not more than five places with English names. Port Weld, Kampong Dew, Teluk Anson, Port Swettenham and Port Dickson, are all named after English administrators. Everywhere else the towns and the districts have retained the musical collocations of vocables given them by those first colonists, the Malays. The Chinese amongst themselves have either Chinese names for many places or else use corruptions of the Malay sounds, but except in the case of the city of "everlasting peace," Taiping, their names have not prevailed over the original Malay. Tamil place names exist for the Tamil, too, but for them alone.

Amongst the Malay place-names are conspicuous those beginning With Kuala, a word meaning the mouth of a river. Kuala Lumpur means the mouth of the muddy (river). Port Swettenham was formerly Kuala Klang, the mouth of the Klang river, where it debouches into the sea. Port Dickson was at one time Pulau Arang. Port Weld was Kuala Sapetang. One says was, but really they are all so still, for the  Malay population still uses the old terms, feeling perhaps that they are quite as euphonious as the new. This country has been spared the cacophonus combinations which afflict America, where the musical Indian names have faded with the fading of a race. But in Malaya the Malays, the only race with a normal birthrate, fade not at all, but, increasing and multiplying steadily, still impose their tongue and their place-names upon all alien races.

Read the names of the towns and districts from the map, and roll the liquid syllables upon the tongue. We could not better them with our unconscionable consonantal English names, and are you not grateful that we have not tried? Each of these names has a meaning, or had; nearly all of them refer to some natural object remarked by the first nomenclators. Trees, birds, flowers, rocks, rapids, all of them have been noted by someone in the past, found true and useful descriptions by the next comer, and retained unaltered. But many of them are now unmeaning to the men of to-day, and have either to be explained by some legend or referred to the aboriginal inhabitant's naming.

To take the map and consider of the names therein is an innocent pastime. Who, for instance, was To' Khalipah, who gave his name to a certain remote village on the Bernam river? " The iniquity of oblivion blindly scattereth her poppy and deals with the memory of men without distinction to merit of perpetuity." Be sure he was someone in his time, or such a high sounding title as Khalifa would not have been attached to him. Be equally sure that the old man was nobody at all but a Mendeling Malay who, after the custom of those immigrants from Sumatra, loved to bear a nominal dignity and gave it to the little place where he settled.

What are these "Kota" names which you find everywhere.? The word means a fort, of course, and they seem to have dotted a good many of them over the country in the old days. New fort and old fort, Kota Bahru and Kota Lama, even " old fort on the left bank," and " old fort on the right bank," Kota Lama Kiri and Kota Lama Kanan, all memory of their "drums and tramplings" is to-day lost, but no doubt in ages long gone past one held them and another went up against them, all after the approved methods of Malay combat when the pahlawan and the panglima, the knights of old, were bold.

Then what possessed them to call one of the highest hills Mount Buffalo, Gunong Kerbau, for assuredly no buffalo ever grazed its slopes? And is there anything distinctive in calling a place Bamboo Village, Kampong Buloh, seeing that there is hardly a village in the land where the bamboo hesitates to grow? Who was the stranger from the West who gave his name to Changkat Orang Puteh, White Man's Hill? How many people were taken by the crocodile of Kampong Buaya, Crocodile Village, before they set a bait for him, caught him and speared the ugly life out of him?

This nicknaming process seems to have been a great favourite in the past, and even yet it prevails. In Perak is a place called Blanda Mabok, Drunken Dutchman, named after an adventurer whose beer bottles and gin bottles still remain in a remote jungle breeding mosquitoes in the water they hold. In Negri Sembilan the British Resident's horse dying at a point on the road between Tampin and Kuala Pilah, the Malays called, and to this day call, the place Dead Horse Hill (Bukit Kuda Mati), quite after the best allusive American style of which the classic example is Dead Man's Gulch.

Black Water, While Water, Yellow Water (Ayer Itam, Ayer Puteh, Ayer Kuning), are all very common names, and are often still referable to the colour of a stream, and the Batu Glugor (weathered rock) names are easily to be interpreted. Casuarina Tree Point (Tanjong Rhu), Fish Point (Tanjong Sepat), are plain enough, and sometime in the seventeenth century there may have been a trading station on Pulau Pintu Gedong, and this name a corruption of Pulau Pintas Gedong, Island of the Channel to the Store. Certainly ingots of tin were dug up near the lighthouse there not long ago.

But of very many of these meaning and musical names all history has long been lost amongst this gentle and indolent people, who live for the happiness of to-day, and not pay heed of the future, equally inquire not of the past.