Practical hints to explorers of the Malay world ....


... and other new additions to the Sejarah Melayu Library 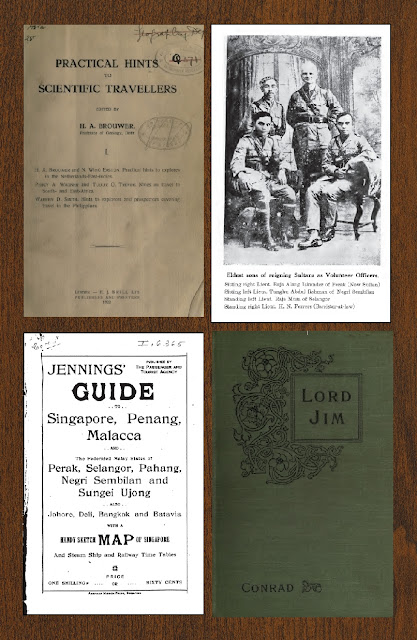 I've updated my Sejarah Melayu Library today with 34 new, er, I mean, old books. And right at the top of my 'To Read' list is 'Practical Hints to Explorers in the Netherlands East Indies', from Volume I of 'Practical hints to scientific travellers' by Hendrik Albertus Brouwer. Published in 1922, the book has useful information for budding Indiana Jones's on practical challenges in the Malay Archipelago, ranging from currency, food, packing, bivouac-building and surveying to intercourse with 'natives', outfits and how to get servants and carriers to carry all your adventuring stuff. On the latter, for example, Brouwer notes that "in many respects natives are like children; treat them as such, that is do not be needlessly severe, and humour them occasionally if what they want to do is not exactly wrong even if you would prefer things done otherwise. Do not be peevish, and don't be a dog in the manger." The intrepid Dutchman also reminds you to never forget to hold a feast (slamatan) for your workmen immediately after the construction of your jungle bivouac: "This is necessary in order to remain on friendly terms with the evil spirits."! 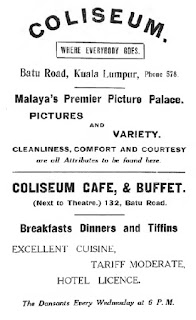 Also in today's Library update is 'Bygone Selangor; a souvenir'. a souvenir book published in 1922 in conjunction with the visit to Selangor of HRH The Prince Of Wales and then future King.  The book highlights notable personalities and institutions in the history and development of Selangor, as well as its key economic and social activities. Just the advertisements alone are a joy to read, including this one for the Coliseum cafe and 'picture house' in Kuala Lumpur. There was an earlier publication 'Bygone Perak: Reminiscences of the Early Nineties' which, unfortunately, I haven't been able to trace anywhere*.

Less royal travellers to Malaya would have found 'Jennings' Guide to Singapore, Penang, Malacca' a much more practical alternative. Published in 1900 by The Passenger and Tourist Agency of Sinqapore, it covers the three Straits Settlements and Federated Malay States of Perak, Selangor, Pahang, Negri Sembilan and Sungei Ujong, Johore, Deli, Bangkok and Batavia. For your shilling, it has information on places of interest, transportation, public services, church services, banks, clubs, rest houses and hotels. 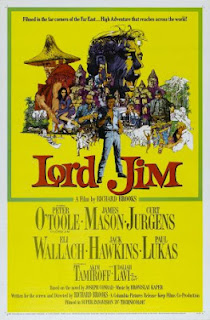 I've also added to the Library perhaps the most famous literary work that's set in Malay lands, Joseph Conrad's 'Lord Jim'. Published in 1900, 'Lord Jim' tells the story of the moral fall and subsequent redemption of a young British seaman in the fictional country of Patusan - a remote inland settlement with a mixed Malay and Bugis population. While living on the island he acquires the title 'Tuan' ('Lord') and wins the respect of the people, leading them against the predations of the bandit Sherif Ali and protecting them from the corrupt local Malay chief, Rajah Tunku Allang. There was a Hollywood adventure film of the book in 1965, with Peter O'Toole playing the lead role with James Mason and Curt Jürgens.

Other titles I've uploaded to the Library today are 'An exposition of relations of the British government with the Sultan and the state of Palembang', 'The Malay Peninsula : a record of British progress in the middle East', 'Chu-fan-chi: Chau Ju-Kua and his work on the Chinese and Arab trade in the twelfth and thirteenth centuries', 'The head hunters of Borneo, journeyings in Sumatra', 'Kambuja Desa', 'My life in Sarawak: The Ranee of Sarawak', 'The Federation of Malaysia', 'Malaysia and the Pacific archipelagoes', 'Matahari; stimmungsbilder aus den malayisch-siamesischen tropen', 'Narrative of the shipwreck of the Antelope East-India pacquet', 'The Natives of Sarawak and British North Borneo', 'Quedah; or, Stray leaves from a journal in Malayan waters', 'Report on certain economic questions in the English and Dutch colonies in the Orient', 'Slave Trade, East India and Ceylon', 'Catalogue of Malay manuscripts and manuscripts relating to the Malay language in the Bodleian library', 'The China Sea directory', 'Evolution of the inhabitants of Java', 'Jelebu: Its History And Constitution', 'Adventures Among the Dyaks of Borneo', 'Seventeen years and four months captive among the Dyaks of Borneo', 'Seventeen years among the Sea Dyaks of Borneo', 'Isles of the East', 'Adventures of a younger son', 'Blown to Bits or, The Lonely Man of Rakata', 'The rajah of Dah', 'The globular jottings of Griselda', 'English-Malay dictionary: Kitab dari bahasa Inggris dan Melajoe', 'Lettres et pièces diplomatiques écrites en malay' and 'An Account of the Island of Sumatra'.

You can visit the Library at http://www.sabrizain.org/malaya/library/

* February 18th update: I have since managed to locate the series of newspaper articles comprising 'Bygone Perak' that was published in the Straits Times between November and December 1920. You can download these here.